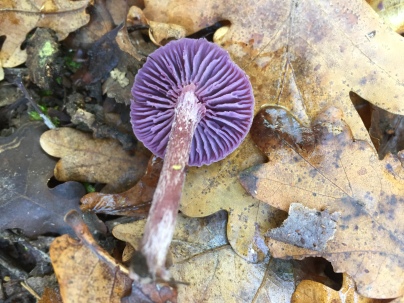 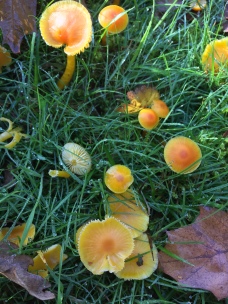 A golden day, a day of blue skies and autumn colour. A snatched day, squeezed between endless cold, grey, rainy November days. I meet Chris and Jude Gibson for another of their popular Bug and Botany walks (Chris Gibson Wildlife). Today it’s Trees and Fungi, and I’m definitely here to learn about trees – the fungi don’t interest me very much at all…

I recognise the impressive tree at our meeting place. It’s a native (Pedunculate, explains Chris) Oak, a marker tree which survived the building of the university in the 1960s and the tarmacking of the carpark, and which Chris reckons may be 400 or more years old. Dwarfed by it is a North American Red Oak – the university park is a mixture of native species and imported American and European trees.

This particular English Oak is probably hollow, other than its cylinder of living tissue. Chris points out woodworm holes and bracket fungus (both eating into the tree and living off it) as evidence. These older oaks, hollow ones like these, survived the Great Storm of 1987, better able to resist the gusting wind than younger ones.
A dead oak nearby has had its branches trimmed and notches cut to allow insects and fungus to colonise it. Such is the extent we now know about trees since the Great Storm – latterly it would have been chopped down. Oak could take more than100 years to finally rot, whereas a felled silver birch we see later, already highly populated by fungus, could decay in five.
While Chris teaches us, Jude scans the ground finding fungi to show us. By the end of the morning, we all ‘have our eye in’ and realise that fungi is everywhere – I had no idea! In fact, I become fascinated. Chris tells us that, like icebergs, we only see 5% of the fungus; that a ‘fairy ring’ around a tree is similar to the flowers on a plant (in this case hidden under the ground), evidence of the symbiotic relationship between fungal tissues acting as root extensions, sending water and minerals into the tree, and living off it. In fact, there are more varieties of fungi than plants, they can travel widely (because of their spores), and we’re only at the tip of said iceberg in terms of understanding what they do.
I’ve come for the trees, as I said, which are wonderful… but fungus find follows fungus find and the unusual names and bright colours entrance me: Butter caps, Destroying Angels, Dead Man’s Fingers, Fairy Bonnets, Deceivers, Cheese Caps, Beefsteak Fungus (which looks like its name and ‘bleeds’ red), Puffballs which puff out their dusty spores when tapped, Ink caps which drip a black inky substance (or ‘deliquesce’ – wonderful word), Funnel Caps, Hairy Turkey Tails, Redlead Roundheads (newish to the UK, found on bark chippings and from Who Knows Where?!).
I’ve saved my favourite Fly Agarics for last – I already knew these as the fairy toadstool, the famous image of the bright red fungus spotted with warty white lumps usually found within reach of silver birch trees. What I didn’t know was that Sami herders feed their reindeer dried fly agaric, that the reindeer never need fencing in or tying up but follow their herdsman faithfully like addicts needing their next fix. Further, it was (somehow) discovered that the hallucinogenic substance remained live in reindeer urine. So, the provenance of Christmas stories involving flying reindeer and red and white colours suddenly seems clearer.

The next day I walk in Villa Wood and find more –  new (to me) – specimens.
There are some lovely sweet chestnut trees too – I’m all about the trees, remember.
I see Jude again later, who explains this has been an especially good year for fungi, what with all the rain – and they’re already past their best as we’ve had our first frost. The trees will still be there in the spring, but for now I’m off to buy a fungus identification book. Click Here for Chris and Jude’s properly labelled photo-blog!

One thought on “Fascinating Fungi”